In California, three siblings are centenarians.
Baby sister Genevieve Gully turns 100 in September. Big sister Ruth Newman is on the verge of her 106th birthday. And brother Clarence “Barney” Barnard has them both beaten: He’s about to turn 108.

But life span in the USA is going down. 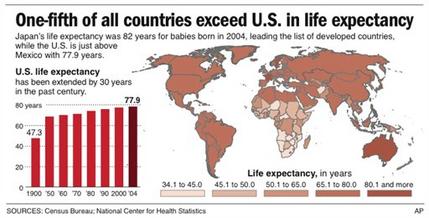 The United States has been slipping for decades. [AP story]

A baby born in the United States in 2004 will live an average of 77.9 years. That life expectancy ranks 42nd, down from 11th two decades earlier, according to international numbers provided by the Census Bureau and domestic numbers from the National Center for Health Statistics.

Sam Harper, an epidemiologist at McGill University said that “it’s not as simple as saying we don’t have national health insurance”, while Dr. Christopher Murray, head of the Institute for Health Metrics and Evaluation at the University of Washington, says,

“Something’s wrong here when one of the richest countries in the world, the one that spends the most on health care, is not able to keep up with other countries.”