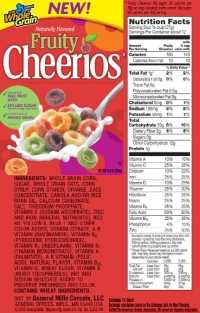 More than half of the children’s foods that show fruit on their packaging or put the word “fruit” in their name contain no fruit.

Fruit is a big seller for parents who want to feed their children nutritious food. So it’s no surprise that manufacturers prominently display berries, cherries and oranges on boxes of breakfast cereals, drink cans and yogurt containers.

Companies fail to put the fruit where it counts — inside the products.

More than $10 billion a year is spent on marketing food to children. Supermarket products that featured fruit on the packaging is a $3 billion-a-year industry.

“The deception is really intolerable,” said Larry Cohen, executive director of the Prevention Institute. “There is really no excuse for misleading parents in a way that weakens their ability to encourage their children’s health.”

Update:
Although recent research has established links between the kinds of foods available in a neighborhood and the health of that neighborhood’s residents, this research has rarely addressed the effects of food marketing on children—especially children in low-income neighborhoods.

Improving access to healthier foods is critical to decreasing childhood obesity in the United States—which affects more than 7 million children ages 6 and older and has tripled among adolescents in the last two decades. Population Reference Bureau

Is healthy food difficult to find – particularly in. low-income neighborhoods? The USDA has developed numbers to say, “Not always.”

Are major value-added food suppliers providing added value in the form of fats and sugars?

The USDA presentation [pdf] shows that “Added Fat” and “Added Sugar” have become important ingredients – now a major portion of the American diet similar or equal to the purchase of meats and grains – while fruits and vegetables remain similar to purchases in 1909.