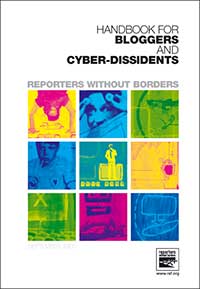 In many countries a journalism student covering a demonstration of school children would be commended for his initiative.

In Syria, student Mesud Hamid posted photos on the net of Kurdish pupils demanding equal rights. He was arrested while taking an exam at university.

“I was tortured,” he said. “For one year and three months I was held in a cell measuring one metre by two. I didn’t see the sun or sky for all that time.”

Mr Hamid has since fled to France.

So what do you do if you want to escape detection from authorities who might not like your work as much as you do?

The Handbook for Bloggers and Cyber-Dissidents is pretty technical but it also contains some simple tips, so you can say what you think without having to worry the censors or cyber-police too much.

The mere mention of Tiananmen Square would be enough to get you noticed. But you may, however, be able to fox the filters.

“If you want to put the words June 4th, you put a comma or a period in between June and 4th, so they are not one phrase and that enables this word to evade detection through the filter, because the filter works by phrases: June 4th or 1989,” explained Xiaorong Li.

“If you put some kind of punctuation between the words they become not a phrase but readers can perfectly understand what you are saying.”

There is no sure-fire way of staying anonymous on the web and avoiding detection.
story at the BBC