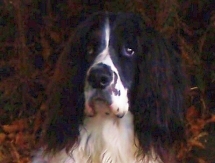 I have learned to raise my dog
into his best of breeding
and the pinnacle of his name.

Herald men have known this.
Becoming my friend honors this creature
thus he learns more than I can teach.

Along with me is he.
Where he is, must I.

Whispering works.
And hands always.
And barking.
And warm.
And new.
And fun.
And me.

More than what I give, better is
when he’s giving all he knows
and best when he’s inventing more
to revel in his joy.
Sharing.

Who Communicates?
Rudyard Kipling observed
“six honest serving men of learning and intellect:
what, where, who, when, how, and why.”

Dogs, parrots, elephants, and even pigeons have been documented communicating what, where, who, and arguably, how. But they all lack the other two servants, when and why, which is the reason Dr. Fox stops short of recommending a dog’s interaction with its master as an intellectual dialogue. Dogs can be taught to tell who precisely how and where to throw what stick for them to catch. But no dog can communicate why she prefers that stick over another one. Beyond the when, of right now, no dog has ever asked a person to feed it tomorrow. Even the dogged quality of unconditional love, as exemplary an expression of loyalty as exists on Earth, can be explained as an instinctual allegiance to a pack leader transferred to a human master. The science of interspecies communication is in its infancy and saddled with more controversy than it probably deserves.