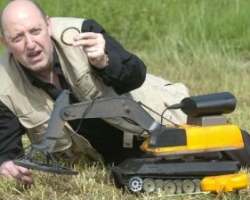 A Roomba with a metal detector.

“We’ve seen the robots that mow your lawn, save your life, hit on your girlfriend, make you an omelet, dispense Kleenex, even make abstract artwork–but where are the robots that help make you filthy rich?” [CNet’s craves via RobotGossip]

A remote controlled metal detector built by a Wiltshire man could revolutionise the art of treasure hunting. Resembling something from the TV show Robot Wars, the invention, devised by John Corney, of Corsley Heath, can climb over footballs and has an on-board camera to show its controller where it is going.

“…far better than a hand held detector because it goes at a steady speed and just generally detects more efficiently.”